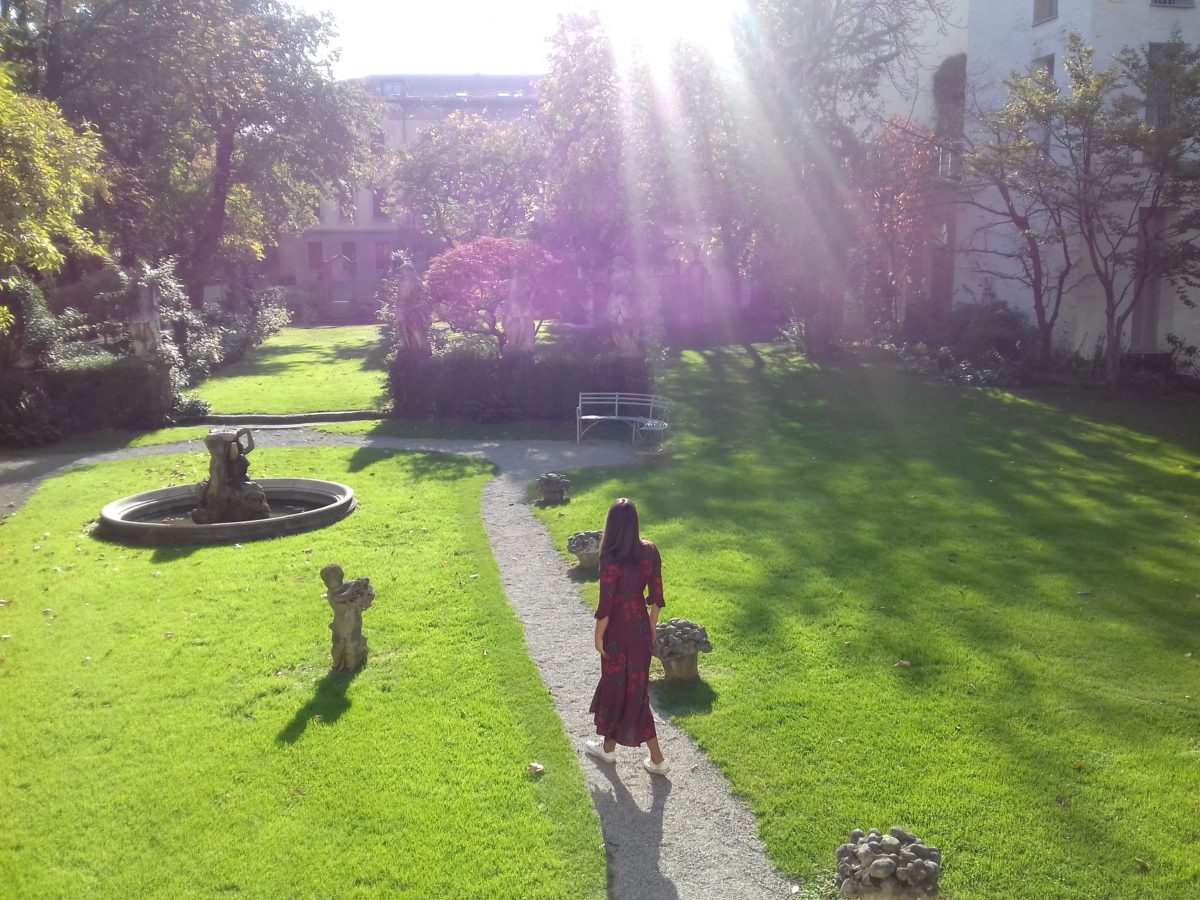 This year has united Italy in the unique celebration of the jubilee anniversary, which you must not miss – 500 years since Leonardo da Vinci’s death. On this occasion, the city of Milan will highlight a number of creativity and contribute to the humanity that Leonardo has left unselfishly behind. The start of this great celebration is May 15th, opening of the restored hall – Sala delle Asse at Castle Castro Sforzesco.

Although not born in Milan, but near Florence, few people know that in this city, Leonardo spent more than 20 years. His great wish was to work in Milan, so he sent a letter about his ideas and abilities to Duke Ludovico il Moro. This letter is considered to be the forerunner of the Curriculum Vitae, which only speaks about Leonardo living far ahead of his time.

In his presentation he offered Ludovico to test his ability through 10 points. Nine of these points included strategies related to military assault and defence with combat vehicles, cannons, mobile bridges and secret tunnels. Only one point pertained to architecture and hydraulics that would make Milan more beautiful and more efficient. That’s why he got a job.

For four years, Leonard created this masterpiece, to which many tourists and artists from all over the world admire. Painted on the walls of the dining room at the Santa Maria delle Grazie monastery. Chroniclers of that time say that Leonardo was precise, but extremely slow.

It was a day when he would just made two brush strokes. Instead of the fresco technique, he opted for a secret blend that used a tempered egg yolk and other organic materials to add oil. This method is ideal for images made of glossy shades, as well as for its perfectionist corrections, but this was not the best solution to maintain moisture and colore protection.

Leonardo decided to paint a moment when Jesus was in the room with the apostles before Easter, reveals: “Indeed, truly, I tell you, one of you will betray me.” Each student responds differently and communicates with each other with the most diverse expressions of the human soul – from surprise, suspicion, anger …

Leonardno liked it the most, he had the passion for every aspect of the human being, the different facial anatomies that reveal the characters to us. He would walk to the streets of Milan with paper and pencils, watching and sketching passers-by, and he often transferred those faces to his paintings, and so as well to the Last Supper.

This masterpiece was restored after Napoleon Bonaparte survived and World War II bombs. Today the tickets for the Last Supper have been sold out in advance, so it’s important to reserve them online.

At the court of the Duke of Milan, Leonardo discovered the outside world, architecture, music and the study of nature, human physiognomy and war machines.

Leonardo measured the city by the length of his hand, mapping it in the air. He sketched the machines for weaving, flying machines, body anatomy. He invented puzzles to capture friends, tirelessly designed new items, visited worksites and crafts, included all kinds of studies and updated every topic of his time.

Codex Atlanticus is a collection of thousands of pages, shown at Pinacoteca Ambrosiani in Milan. The set presents Leonard’s diary of eclectic writings and multidisciplinary projects. Because of such an opus, there is an eternal question from where he got so much talent and knowledge, especially when it is known that he has never gained scientific education or has known, for example, Latin.

Ludovico il Moro, to reward his labour, donated to Leonardo a vineyard, a plot of over 8,000 square meters in the Porta Vercellina district. The vineyard palace was across the road from Santa Maria delle Grazie, which was ideal for her job, painting the Last Supper just across the street. For Leonardo, this was probably a nostalgic reminder of Toskana, where his family had been cultivating vineyards and producing wine.

In 1920, architect Piero Portaluppi restored Casu degli Atellani, an elegant palace in Renaissance style, including a part of Leonard’s vineyard. The second restoration was made in 2015 when the original parts of vineyards were reconstructed. The traces of the grape vine that Leonardo has cultivated was found on the ground, Malvasia di Candia Aromatica, which produced sweet wine, well known in the antiquity.

Casi degli Atellani was latest renewed by art collector and architect Piero Portaluppi, he exhibited contemporary works with the original traces of the Renaissance, so today, the vineyard and the palace itself, is a truly romantic walk through history.

Did you know that Milan once looked like Venice? Almost a dozen watercourses passed through the city, some of which are natural and some are artificial. They carried the name, and they represented the system of ports, auxiliary channels, piers and windmills that once used to be a city’s life function.

Since ancient times, Milan has had a great industry that is still proud of today. Raw materials came along the way to Milano and finished as products. Duomo cathedral building was supplied with wood, sand, stone and marble blocks from Lake Maggiore, and the Duomo returned the service by maintaining waterways. Roads in the centre where we are wandering today were boat canals.

Water was a passion that inspired Leonard as an engineer, geologist and artist. He was in charge of the unification of all the waterways in order to create a regional network that would be able to move without interruption, and the dream was to reach the sea.

In his Codex Atlantic, Leonardo presented some of the engineering innovations, among the many drawings there was an underwater opening that could be manually moved and thus regulated the swim and swell. One of the locks built at that time with this mechanism can still be seen today. The place is called Conca dell’Incoronata, and is located not far from the Brera district. It is a dry part of Naviglio Martesana, a waterway extending northwards along a long cycling trail. Two examples of these tiny locks have been preserved today in the Museum of Science and Technology.

When Leonardo lived in Milan, Sforza Castle was the center of an ideal city, designed by the Renaissance architect and genius Filarete in an osmotic star. The project was called Sforzinda and was a symbol of harmony and perfection.

Ludovico il Moro, besides gathering top artists and architects around the court, was also famous for its spectacular events organised by the court.

The main stage designer for the event was Leonardo da Vinci. Leonardo was in charge of spectacular events, luxury weddings, and even for the wedding of Gian Galeazzo Sforze and Isabelle d’Aragon, he designed a machine that displayed stars and rotating planets.

Since the prince loved art in 1498 he asked Leonard to decorate one of the rooms – “Sala delle Asse”. Leonardo painted the walls and the ceiling in the shape of the tree of the mulberry in honor of Ludovico Sforz, and the tree symbolizes his nickname “Mora” (mulberry).

The art work in Sali delle Asse is a combination of scientific observation of nature and astrological symbolism. On the walls he painted the forest scene of the trees rising to the ceiling. Weather and history also made their decorations in Sali, but this year the restoration is completed and its discivery opens the jubilee anniversary 500 years since Leonard’s death.

A round, lightweight shape that looks like a propeller, set on a circular plane – Vera Aerea is one of Leonardo’s most beautiful drawings. Some even saw the inspiration for a helicopter in this small project

This is just one of the many drawings focused on the flight concept, many of which are in the Atlantic Codex, with wings on the move, real sailboats, and stylish machines inspired by bats. Five hundred years after Leonardo lived, his research continues to fascinate us, make us think and – most importantly – inspire us. In 1953, exactly five centuries after his birth, the ancient 14th century monastery became the first scientific museum in Italy, named after him.

This museum has revived Leonard’s works and represents a timeless journey through the history of technology that enables us to explore the potential of the future.

As costume designer and choreographer of the extravagant gala party of the Sforza Castle, Leonardo had the task of making the statue of a magnificent bronze horse as the first work. The work was really challenging because it had to combine artistic inspiration and technical expertise to form a statue of 15 tons, which was supposed to be 8 meters high.

After years of observation of horse anatomy, design and work, the prototype of the terracotta was displayed in the courtyard of today’s Palazzo Reale. However, the war threatened Milan, and the bronze of the statue was instead cast into guns and fighting cannons. Leonardo then wrote in his notes a familiar sentence: “I will never talk about Horse again”.

Centuries later, Leonard’s dream was adopted by Charles Dent, American pilot and art collector, with passion for the Renaissance. In 1977 Dent read an article in the National Geographic magazine titled “The Horse That Never Was” and began his big quest for the creation of Leonard’s horse, so he borrowed money from the crowdfunding method.

The circuit was closed in 1999 when a colossal statue was brought to Milan. It was made by Japanese artist Nina Akam and proudly stands in front of the San Siro.

Itinerary through the city ends with the statue of Leonard. With its long hair, its thick cheek and its proud, imaginative expression, this icon goes beyond history. Some were even convinced that he was a model for Plato’s philosopher at the School of Athens from Raphael. The statue was set up in 1872 at PIazza della Scala, in front of the theater .

For many years Leonardo has imagined and designed Milan, his city, so if you’ve been thinking of visiting Milan, 2019 is the ideal time for that.